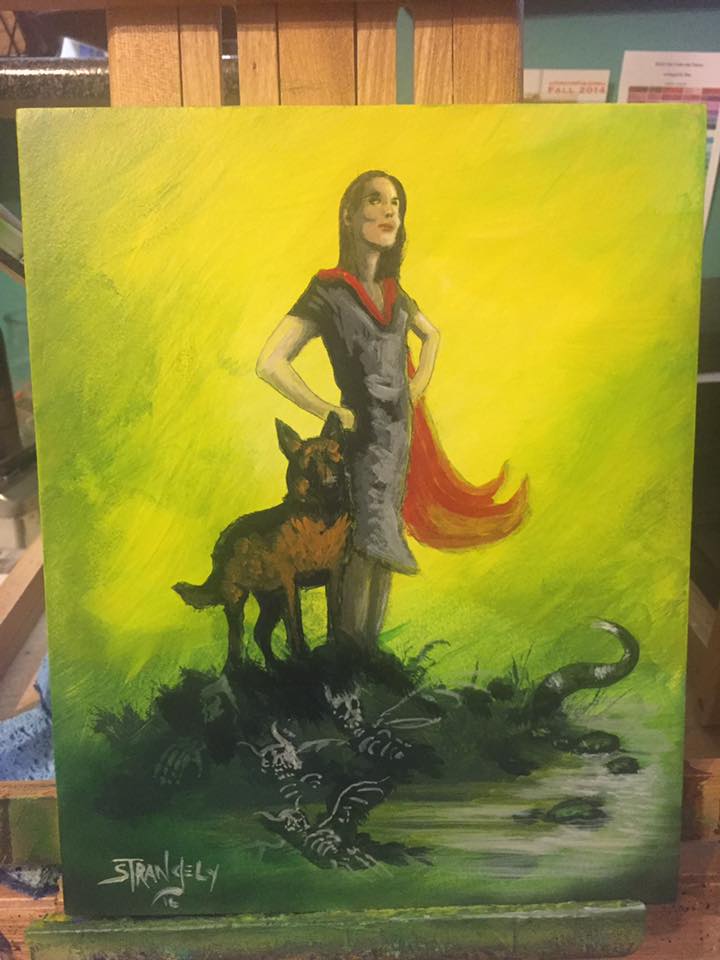 As I walked into the crowded artist’s ally at DragonCon in Atlanta, GA, I was overwhelmed. It was my first con, ever, and it was the first time I had ever been given the privilege of covering a con quite like DragonCon. I was there as press for The Daily Quirk (now known as So Fetch Daily), but on this particular day I had nothing going on.

Armed with nothing but a love for art, my husband, and a limited amount of cash I walked in awestruck by the amazing talents that had gathered there. After walking aisles upon aisles, I came across a booth selling art that was Tim Burton-esque; dark and twisted, amazingly drawn, and full of characters reinvented in the eye of the artist.

The booth belonged to Dirk Strangely.

I stopped at his booth and was immediately drawn to his style, specifically his Strangely Cats and his Alice in Wonderland series. I think that year I vowed that I’d come back to every DragonCon just so I could see him and his art, and that was true until I moved 2200 miles away and could no longer make that trek.

That first year I bought a Cheshire cat painting that I truly cherish. Of all the characters in Alice in Wonderland, I was always drawn to the Cheshire cat, and I’m not sure what that says about me as a person, but I’m sure there are a couple psychoanalytical people out there who could tell me.

He told me at that first DragonCon, “Are we friends on Facebook yet? If not, you should add me, I post my art there all the time!” So I did what any creepy, newly acquired fan would do and I actually found him on Facebook. I haven’t regretted that decision, because since then I have supported his art the best I can given my own personal financial restrictions.

Art, in any form, heals the mind and soul. Whether that be music, painting, photography, dance, sculpture; and it doesn’t matter whether you’re the one producing the art, or receiving it, the curative power of a beautifully crafted artwork can speak volumes when words can’t be formed.

In 2016, I started down the path of a mental health journey I had never seen the likes of. My first stop on my highway to hell was the rock bottom of my mental health. If you’ve read my posts before, you know that my mental state took a tremendous nose dive that year, and I was in desperate need of strength, both mentally and emotionally. I needed to feel like I was still a person, that I still had that flame inside me, so I reached out to Dirk Strangely and inquired about a commission I’d love to have done.

I explained to him that my life, my mental health, needed a boost. I needed something that signified the fight I still had in me to defeat the demons that were slowly seeming to eat away at me.

In this image is me, standing tall and proud (modeled from a picture I took in college) with my German Shepherd Ronin beside me, on top of a mound of skulls, bones and remnants of demons. Those skulls and bones were meant to represent overcoming the battle with the evil that I was facing in my present day life.

To this day, I still glance at it and smile when I need a little extra strength. It’s a reminder that even in my darkest hours, I managed to conquer the parts of my mind that were trying to destroy me and I came out a bigger, better person. It sits in the kitchen, on the counter held up by the lighter I use to light my favorite candle – Juicy Watermelon from Yankee Candle.

Why is that information important? It’s probably not, but doesn’t it paint a vivid picture in your mind? No? Well, alright then…

The second commission I had done, To The Moon, came from a much happier place.

To The Moon’s concept was born from a therapy session. At the time I requested the commission, I was doing EMDR therapy, or Eye Movement Desensitization and Reprocessing. The goal of this therapy is to target traumatic events, then reprocessing and understanding them from the view of your present day self. It’s an amazing therapy used most commonly with those who struggle with PTSD, but it can be extremely beneficial for any trauma that causes discord in your day to day life.

In this therapy, we regularly do internal work with younger versions of my self, or parts, that hold the trauma. In this particular scenario, we imagined my younger self taking the trauma, putting it in a 2 liter bottle, strapping TNT to it, and blasting it into space where it’s then detonated and explodes.

The idea was to send all the anger, hurt, shame and disgust away and destroy it, because it wasn’t my own. The image that was painted in my brain when describing it was something so incredibly symbolic, that having it memorialized by an artist I admired seemed fitting.

I approached Dirk Strangely a second time, exposing my heart and soul, and he took that information and created To The Moon. The coolest part? The detonator glows in the dark.

When you look at To The Moon, you see two people holding hands; a man and a woman, which symbolizes my husband and myself. Together, we are standing, watching this younger version of me sit atop a hill and hitting the big, red detonate button to destroy the last of my anger and shame.

This rendition of a major turning point in my mental health still gets me a little choked up, in a good way of course. I feel like I’m lucky; not many people can say they have these beautifully drawn pieces of artwork that they can turn to for strength, hope and self compassion. Those are all traits that I occasionally have to remind myself to find, and I’m forever grateful that Dirk Strangely helped me bring those visions to life.

When I walked into the Artist’s Ally at DragonCon in 2014 and stumbled across Dirk Strangely’s booth, I don’t think I could have ever imagined the path I would have walked. His art is something I connect with, I resonate with. Not just my commissions, but as a whole. It’s quirky, twisted and bizarre, but is also created with so much passion.

It’s obvious he loves his work, and with each idea that comes to life on paper, I see that passion grow. His talents helped me heal through a time that healing wasn’t coming as readily as I’d hoped. His art gave me a visual representation of the person I wanted to be, and the strength I needed to forgive and begin to thrive.

Since these commissions were completed, Dirk started creating art under a new name, and I feel like I own a small piece of him. Wow, that sounds a bit creepier than I anticipated, but I’m sure you all follow. That chapter of his life may have come to a close, but it will never be forgotten, not by me.

So to you, it may just seem like two paintings hanging in my home. But to me? They are constant reminders of how the artist formerly known as Dirk Strangely helped me heal.

If you would like to email #Fearless, you can send any questions, concerns, comments or suggestions to contact@hashtagfearless.com. We do our best to respond within 48 hours, but if for some reason we cannot get back to you in that time frame, we promise we will always respond as soon as possible. You can also find us on any of the following social media sites: Facebook, Twitter, Pinterest and Instagram!

Lastly, we run an Emetophobia Support Group on Facebook. Emetophobia is the intense and irrational fear of throwing up, and it is one struggle we are passionately engaged in. It is a closed, by request only group to help facilitate sharing and support by all members. It is also private, meaning that the posts you and others make will not show up publicly in your newsfeed.

"When I look back on my life, this quote is the epitome of where I've come and it resonates with me far more than I ever intended. My life has drastically changed, yet I am stronger, more independent, more me, than I have ever been in my entire life. I find that each day I am changing, and I'm discovering a new part of myself that has been there all this time, yet been carefully hidden behind fear, anxiety and self doubt. I am not the same person I was a year ago, let alone a week ago, and for the first time in my life that doesn't entirely scare me. Change is inevitable, so it might as well be for the better." -Chelsie S., Writer for, and Owner of, #Fearless Read the full story by clicking the link in our bio! #fearless #quoteoftheweek #qotw #fearless #iainthomas #everythinghaschanged #yetiammoreme #thaniveeverbeen #change #selfdiscovery #inspiringquote #inspire #life #mentalhealth #anxiety #changeisinevitable #hashtagfearless #recovery #instagram #dailyinsta #instadaily
Follow #Fearless on WordPress.com