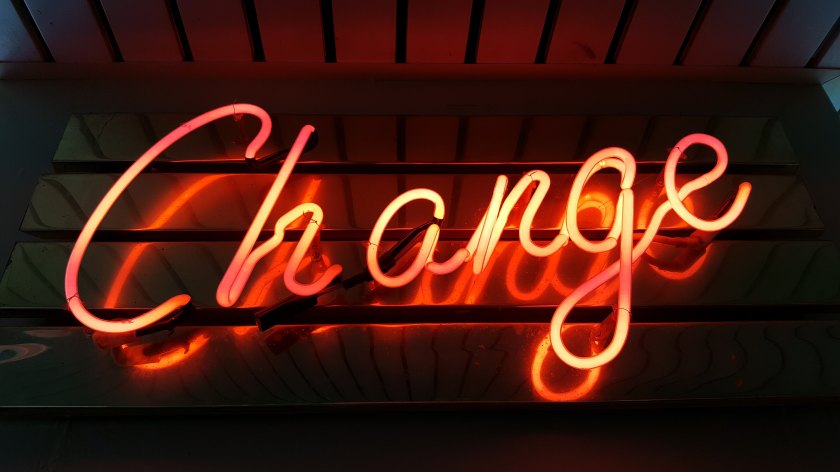 Sometimes I sit down to write posts and I have no direction. In all honesty, those posts don’t usually end up on my site. Why? Because I spend a lot of time staring into my computer screen screaming. It’s… just something I’m used to by now. But today I decided to flip the script, and I’m just going to write whatever comes to mind because why wouldn’t I just give it a shot?

I feel like, in many ways, I am always thinking. I have so much going on, whirring by in my brain that I struggle to pinpoint a single subject. I have 4000 ideas in my head, none of which are fully formed and it can sometimes be overwhelming trying to stop the spinning to get something out there. I find it’s one of the biggest hurdles I have with my blog. I either sit down and get three articles written, or I spend my time staring into the abyss, wishing I could just do SOMETHING.

I think this might be called ADD – but the jury is still out, to be honest.

I’ve recently been thinking a lot about change. How, despite humans being inherently unwilling to change, it happens regardless and we either have to be along for the ride, or we’ll get drug through the mud.

Change is hard, but change is inevitable. Change takes us by surprise, but can also be a choice. I feel like 2019 is going to be a year of change for me. Or, you know, it may not be. Who even knows? Not me, that’s for sure. But, I can tell you that it has already surprised me with little changes here and there. Some of which I’m excited for, some of which I’m nervous about.

I feel like I have all the right protocols in place to enact change in my day to day life, in my habits, in my world; but sometimes it feels like it’s two steps forward and three steps back. I strive for a sense of control in an ever changing world, and in my chaotic life (that honestly is created by me), yet I struggle to keep it going.

I feel like this year is my year to make it happen. Maybe I’ll spend some time in a future post explaining how to make and accept change. Who knows, maybe it could really help people.

This whole post started with me doing something different than I normally do. Fitting, because change was my theme apparently, but I kind of like the idea of just writing out whatever I’m thinking. Perhaps I’ll make it a series. Fearless Babbles? Yeah, you know what, I kind of like that.

Until next time, Internet.